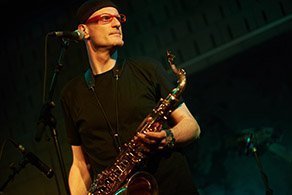 Frank started playing the saxophone at the age of 12. He was soon influenced by a number of "greats of the earth" from the jazz, pop and rock circuit, including Michael Brecker, Jan Garbarek, Stevie Wonder, James Brown, George Clinton, Bootsy Collins, Prince and many others. At the age of 18, Frank won the handsome Youth Jazz Trophy, awarded by Toots Thielemans at the Ostend Casino.Frank taught at the music academy in Kortrijk, the music academy in Overijse, Tervuren and Hoeilaart, the conservatory in Ghent and the jazz studio in Antwerp.Frank met Carlo Mertens (trombone) and Nico Schepers (trumpet); after a lot of productions and collaborations Carlo, Frank and Nico decided to form a three-piece horn section. The first real horn section in Belgium was born: The Heavy Horns. This section has built a strong reputation. Always looking for sound, energy, perfection, fun, evolution and friendship. The Heavy Horns played on numerous national and international productions (CD, TV recordings + live performances.) Frank is someone who has always distinguished himself by his exceptional sound, openness, soul and diversity of style. Frank is a very popular and demanding soloist, and tours the world without a break. Frank is an endorser of Yanagisawa saxophones and Vandoren reeds.